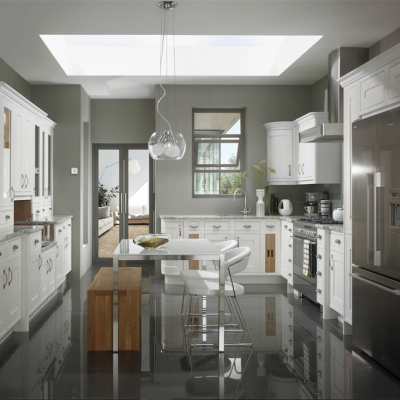 Since the emergence of the first labour-saving appliances in the 1900s, home technology has continued to rapidly progress, with appliances becoming no longer a luxury but a necessity as our lives become increasingly busy.

The next natural step is seemingly the Smart Home. Technology has now advanced to such a degree that next generation Smart appliances can now be connected and controlled by an app through a single device, such as a mobile phone or a tablet.

Interestingly, the idea for the Smart Home actually emerged in 1975. Pico Electronics in Scotland, who had already revolutionised the calculator industry by introducing the single chip (now known as a microchip) at a time when calculators required at least five chips to function, were searching for a new large scale commercial project. Partnering with a company called BSR, who, at the time were the world’s largest manufacturer of record changers, Pico developed a remote control using ultrasonic signals for their latest record changer, the Accutrac 4000, which allowed the consumer to change the record track from the comfort of their sofa.

From the Accutrac 4000, the idea of controlling other appliances such as lighting arose, and over the years their concept of home automation was improved and refined so that by 1978 their advanced technology began appearing in Radio Shack stores in the United States.

Smart Technology has come a long way since the 1970s, with most homes now equipped with high speed Wi-Fi to allow for easy connectivity. Until quite recently, Smart Home Technology has been limited to technology enthusiasts, but with more appliances on offer, and the technology becoming ever more user-friendly alongside the tantalising promises of making our busy lives more comfortable and considerably more convenient – could 2017 be the year that Smart Home Technology really takes off?

There is so much variety on the market, or at least coming very soon. A kettle that will automatically boil to the desired temperature following the touch of a button; a refrigerator able to keep track of its contents and the expiry dates and even allow a digital display of the kid’s artwork or notes, adding a very modern twist to the more traditional use of a fridge door!

Of course, it’s not just about small self-contained appliances. Consider the latest in Smart Heating. Picture the scene. It’s freezing cold and dark outside, you’ve left work and made the mad dash to your car, keen to get home and cosy for the evening, except - the weather has been so mild until today that your house is cold, unheated and unwelcoming.

Today’s smart heating systems aren’t just limited to turning the heating on at the click of a button via your smart device, they can actually save you money. The very latest systems are able to heat your home efficiently and economically, track your movements via the inbuilt location services on your mobile phone to ensure you never return to a cold home and constantly monitor and switch you to the best tariffs available on the market, ensuring you need never overpay on an energy bill. Even better, the 5iE Wireless Smart Thermostat, for example, is compatible with most current central heating systems, transforming your existing system into a Smart one instantly.

With only 3-5% of UK households currently operating a smart heating system – it really does seem to offer a peek into the future, especially when you consider the benefits on offer from a comfort, convenience and financial perspective.

Heating isn’t the only system becoming Smart; lighting and security are the most popular options for UK households, enabling holidaying homeowners to set the lights to emulate as if someone were home, or a security system that doesn’t just act as a traditional burglar alarm, but actually allows the homeowner to monitor, control and interact with their home whilst away. You can even get a smart doorbell that offers the less mobile (or those alone or wary) the opportunity to speak to, view and allow access to those visiting, all through the touch of a button.

Smart Home Technology is developing rapidly and many predict that 2017 will be the year that it moves into the mainstream, creating an aspirational way of living for many. Why not think about making your home Smart?