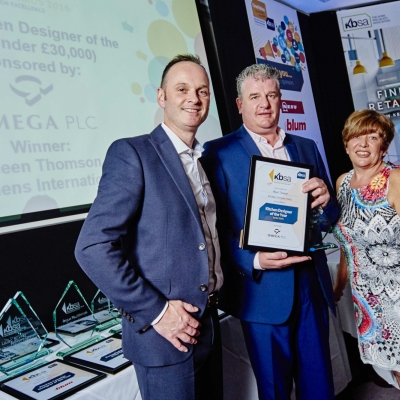 The KBSA have announced the winner of the Kbsa Kitchen Designer of the Year (under £30k), sponsored by Omega in the 2016 Kbsa Designer Awards, as Aileen Thomson of Kitchens International .

The judges said of Aileen’s winning entry ‘The juxtaposition between new & old; a contemporary kitchen in a traditional space – fits the brief perfectly ‘.

Aileen unfortunately was unable to attend the Awards , but Kevin Buchanan from KI accepted the award on her behalf at the annual Kbsa networking dinner on 27 September, which took place following their AGM and national conference at The Welcombe Hotel, Stratford Upon Avon.

Ruth Ward of the KBSA said ‘Well done to Aileen, we are delighted with the quality of the designs Kbsa retailers are producing ‘.