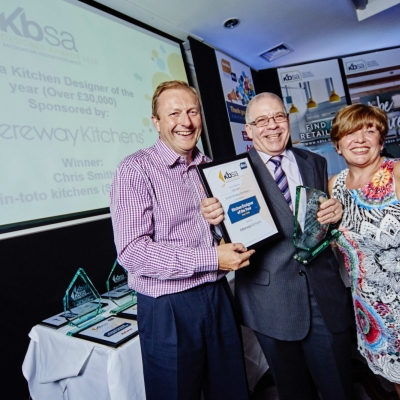 The Kbsa have announced the winner of the Kbsa Kitchen Designer of the Year (over £30k), sponsored by Mereway Kitchens in the 2016 Kbsa Designer Awards, as Chris Smith, in-toto Kitchens (Southport).

The judges said of Chris’s winning entry ‘This is a perfect example of how traditional and contemporary can work together, the space was a challenging shape – working within the confines of the existing structure.’

Graham Jones, Sales & Marketing Director at Mereway Kitchens, presented Chris with his Award, together with Kbsa National Chair, Tina Riley at the annual Kbsa networking dinner on 27 September, which took place following their AGM and national conference at The Welcombe Hotel, Stratford Upon Avon.

Ruth Ward of the KBSA said ‘We are delighted that Chris has won this award, as it demonstrates that there is a place for the traditional kitchen as well as the contemporary open plan social living spaces, as one of judges said – ‘this is a kitchen!’ Again proving the diverse range of skills that Kbsa retail members have ‘.