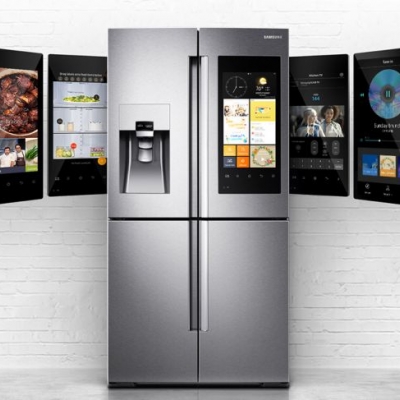 From the first vapour-compression refrigerator in 1834 to the introduction of induction cookers in the late 90s, innovation has had a constant presence in the kitchen. But how close are we to eating our meals in something reminiscent of Bruce Willis’s apartment in The Fifth Element?

While we may be some way off food magically appearing in a matter of seconds, there are a variety of innovative advancements making their way into people’s homes.

The F+ is described as a “state-of-the-art free built-in multidoor fridge freezer… designed to meet the demands of modern consumers for fresher food and extended shelf-life.”

Its elegant looks, combined with technology such as smart infrared sensors and a quick-freeze compartment, make it a great potential addition to your home.

Elsewhere, the Haier Super Drum – “a game-changing innovation for families who don’t want to choose between big capacity and space savings” – is making the weekly wash even simpler. Boasting a full-touchscreen and guaranteeing optimum cleaning results, this machine won the 2017 Red Dot Design Award.

Not ones to stand by and watch, Fisher & Paykel have launched the world’s first Dishdrawer Dishwasher and the Cooldrawer, which can change from a refrigerator to a freezer at the simple touch of a button.

The Dishdrawer, on the other hand, continues to revolutionise kitchen design, offering a “quieter and more energy and water-efficient” service in a compact space.

Miele unveiled their new Dialog Oven at this month’s highly anticipated IFA trade show in Berlin. The self-claimed “biggest cooking innovation in decades” is set to change the way we cook our meals, using electromagnetic waves to cook each piece of food to perfection.

Its capabilities were demonstrated at the event when it was prompted to cook a piece of salmon wrapped in ice. Within ten minutes, the meat was cooked yet remained in the block of ice.

This demonstration evidenced its huge potential for keen chefs as it means you could make a roast dinner and have the vegetables cooked to perfection then left in the oven with the chicken without receiving any further heat.

The Dialog Oven will cut 70% off cooking times while remaining far more efficient. The only bad news is that it won’t be available until 2019!

If you can’t wait that long but still want to embrace innovation when cooking your meals, you could opt for the June Intelligent Oven, which comes equipped with a camera to look at your food to determine how much longer it needs to be cooked for. This fantastic machine can also be controlled using an app on your smartphone.

A helping hand in the kitchen

Fed up of scrolling on your mobile phone or tablet and getting the screen dirty midway through checking a recipe? Struggle no more with the voice-controlled kitchen assistant, another recent invention that’s making its way into the homes of many.

Bosch’s Mykie, for example, will provide the next step of your recipe whenever you’re ready to ask for it. There are also further concepts on the production line that will link up with an oven camera to inform you when you need to increase or reduce the heat.

Liebherr’s MIA system, which also debuted at IFA, is intelligent enough to recognise what food is currently inside your fridge, meaning no more confusion or panic buys at your next supermarket shop!

Meanwhile, Samsung’s Family Hub 2.0 includes a 21.5-inch touchscreen and voice support, meaning you’ll be able to talk to your fridge! The touch screen is very handy for leaving messages, and sharing photos, calendars and shopping lists, which will be aided by the same camera technology as the MIA.

The home of the future

Looking forward to embracing the kitchen of the future? A kitchen that not only increases efficiency but one that reduces both wastage and its effect on the environment? Click here to discover what Ikea predict your kitchen will look like by 2025.