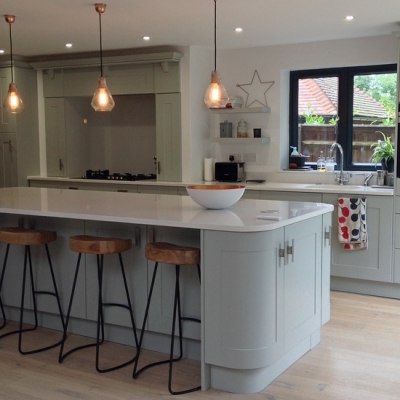 As with most clients, Lynne Jones decided to shop around before deciding on her ideal partner to design and fit her new kitchen at her home in Beaconsfield.

To this end, she sought not only her friend’s advice but that of her architect too.

“We contacted KBS and one other kitchen company from Chesham, recommended by our architect,” says Lynne. “The other company visited and spent time taking our requirements but never got back to us with a design! This was even after giving them a chase after 8 weeks of nothing and them saying they would send it! “I had no confidence in them after that, especially when compared to the approach of KBS. I’d seen my friend’s kitchen and thought it was lovely, so combined with their knowledge and friendly approach, they deservedly got the job!”

The work involved several parties, including an architect to re-design the layout, and then builders who worked on those plans. KBS saw both the original layout and the proposed plans and then designed, supplied and fitted the kitchen from there.

The original kitchen was dark with red units and drab coloured tops. In order to create space and light, a wall was removed and two sets of bi-fold doors went in. A partition wall was also put in to separate off the front living area. KBS then installed the kitchen and utility room – and Lynne is delighted with it all.

“I love the painted finish on the cabinets and spacious feel provided by the light coloured worktop,” she says. “Other favourites are the Quooker hot water tap, the waste disposal system, integral recycling bins and the butler’s sink in the utility room."

“I cannot think of a better designer and all-round wonderful person to have worked with than Sue. She was super helpful, listened to what we liked/wanted but also gave plenty of ideas when we weren't sure. She seemed to catch on quickly to our preferred styles and was really proactive and responsive in her communications without being overbearing.”