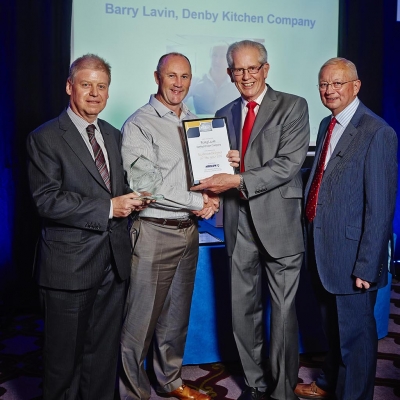 The KBSA have announced the winners of the 2014 Kbsa Designer Awards, and the winner of the Bathroom Designer of the Year was Barry Lavin, Director of Denby Kitchen Company. The judges said of Barry’s winning entry that it displayed beautiful workmanship and a brilliant interpretation of the client’s brief. .and further, that the bathroom would be a real pleasure to use.

Overall, the number of entries was almost double those of 2013, and the quality reflects the skills and professionalism available from KBSA retailers. Barry was presented with his award at the annual Kbsa networking dinner on 23rd September, which took place following their AGM and national meeting at The Welcombe Hotel, Stratford Upon Avon.

Graham Ball, Chief Executive of the KBSA said ‘Barry epitomises all that is great about our retail members. He is in their view, an outstanding designer who views all details, however small, such a crucial part of the brief, and interprets these with a professional eye for those small details that actually do make such a difference.’