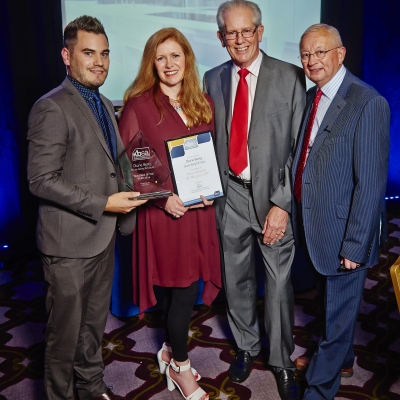 The KBSA have announced the winners if the 2014 Kbsa Designer Awards. Retaining her title as overall designer of the year was Diane Berry of Diane Berry kitchens in Prestwich, Greater Manchester, with her also repeating last year’s success as kitchen designer of the year. The judges described her entry as ‘delivering the brief perfectly in a stunning and contemporary way, and with fabulous taps!

The judges said of Diane’s winning entry ‘a kitchen is very challenging as there are so many elements to be considered – and Diane’s winning design stands head and shoulders above the others’.

Overall, the number of entries was almost double those of 2013, and the quality reflects the skills and professionalism available from KBSA retailers.

Diane was presented with her awards at the annual KBSA networking dinner on 23rd September, which took place following their AGM and national meeting. Graham Ball, Chief Executive of the KBSA said ‘Diane has retained her awards in 2014, and the judges had no hesitation in awarding her both the Kitchen Designer and Overall KBSA Designer Awards with her entry. She is in their view, an outstanding designer who views all details, however small, such a crucial part of the brief, and she interprets these with a professional eye for those small details that actually do make such a difference.’