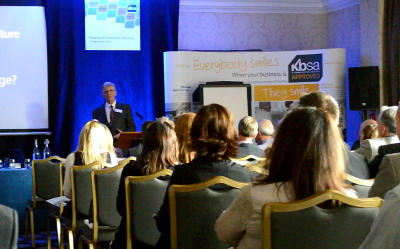 The KBSA have said that this year’s AGM, National Meeting and Networking Dinner were their most successful since the start of the recession. Attended by over 40 retailers, and almost 30 corporates, there were almost 120 delegates in attendance.

Following the formal business, there were updates from some of the KBSA officers on the market opportunities for members, as well as from Renee Mascari, CEO of the kbbNTG, who updated the meeting on the new Foundation Degree Course which started this month. David Dalglish, following his impending retirement from Knaresborough Kitchens, was re-elected as National Chair of the Association for a further 12 months, and all existing Regional Chairs were unanimously re-elected.

Guest speakers were Richard Flower, of Ashford Fitted Interiors, who spoke about the changes made to his family business which resulted in higher business levels, Elaine Cowan, Independent Showroom consultant, spoke about the key elements to ensure that showrooms are kept updated in line with developing consumer needs, Marianne Shillingford, Creative Director of Dulux spoke about colour trends and their new partnership with the KBSA. The final speaker was Ben Kench, Small Business Booster and author of the best-selling ‘Selling for Dummies’ who gave an entertaining and upbeat talk about ideas for business development.

The meeting was followed by the annual Networking Dinner and Awards presentations – see separate release. Graham Ball, Chief Executive Officer, said ‘This year’s meeting was one of the best we have delivered. The feedback from members was excellent, and we know that delegates all took several things away from the presentations to help them improve their own businesses. The key feedback for me was how all present were delighted with the new website, and the opportunities this will give us all in the comings months – that was most re-assuring to Ruth Ward and myself.’