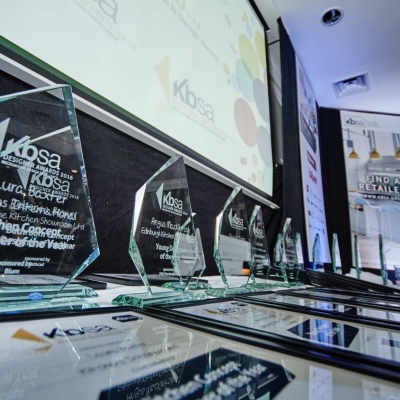 The KBSA have announced the winners of the 2016 Kbsa Designer Awards.

Winner of the Kitchen Designer of the Year (Under £30k), sponsored by Omega was Aileen Thomson of Kitchens International with her ‘blend of modern and traditional’ kitchen.

Winner of the Kitchen Designer of the Year (Over £30k), sponsored by Mereway was Chris Smith, of in-toto kitchens (Southport) with his ‘mixture of how traditional and contemporary can work together’.

Winner of the Bathroom Designer of the year, sponsored by Airflow, was Stuart Irving of Ablutions Luxury Bathrooms, the judges commented that it was a ‘very challenging room – demonstrating good design skills’.

Winner of the Young Designer of the Year, sponsored by PWS, was Angus Mackintosh of Edinburgh Kitchen Company (EKCO), judges commented that ‘for a young designer this was fantastic – creatively it bucked the trend to everything else’.

Winner of the Kitchen Concept Designer of the year, sponsored by Blum, was Laura Baxter of Kitchens International with her ‘Good balance for an industrial space but with doors to cover the clutter ’.

Winner of the Bathroom Concept Designer of the Year, sponsored by Bathcad, was Rebecca Brown of The Kitchen Showroom Ltd that ‘Texture in tiling shows a good understanding of material used in the bathroom’.

Winner of the Kbsa Kitchen Concept Student Designer of the Year, sponsored by Articad in conjunction with Bucks New University, Grace Stonehouse of Roundhouse Design for a ‘A really confident design which demonstrated great sensitivity to the building’s architecture’.

The winners were presented with their awards at the annual Kbsa networking dinner on 27 September, which took place following their AGM and national conference.

Judge Renee Mascari, owner of Mascari Design Solutions, said ‘The KBSA Design award entries this year demonstrates a fantastic collection of kitchens & bathrooms, the Kbsa really has the cream of the crop of current designers. I am especially pleased to see the young design talent within our industry. Congratulations to the winners, those shortlisted and the young designers for having the courage to enter!

Ruth Ward of the KBSA said ‘There were some fantastic designs. We are delighted with the level of entries this year, despite members being rushed off their feet with increased business levels, leaving little time for activities such as these. I think this shows how important these Awards have now become for our members, especially as all designs are judged anonymously which make the Kbsa awards different from many of the kbb competitions, and the PR associated with them is of tremendous value’ Thanks to all those who entered and to our judges and sponsors’.