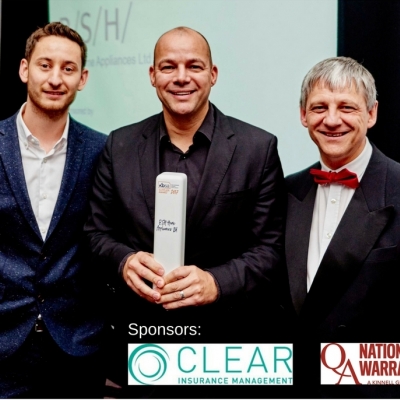 The 2017 Kbsa Supplier of the Year Award was announced at the 2017 Kbsa Networking Dinner which followed the AGM Conference on 03 October 2017. Kbsa members voted for the corporate member suppliers who they thought had excelled in their service to them in 2017.

The award which was sponsored by Clear Insurance Management Ltd and QANW was won by BSH Home Appliances Ltd.

Kbsa Corporate Chair, Malcolm Scott said, “This award is well deserved and a true reflection of the levels of service provided to customers, as they are voted for by Kbsa retailers. It is always a great pleasure to reward brands that support the independent specialist directly, and this year’s winner should be proud of their recognition.”

This award is based on feedback from Kbsa retailers throughout 2017, and reflect members’ opinions on those
brands that have performed well during the year.