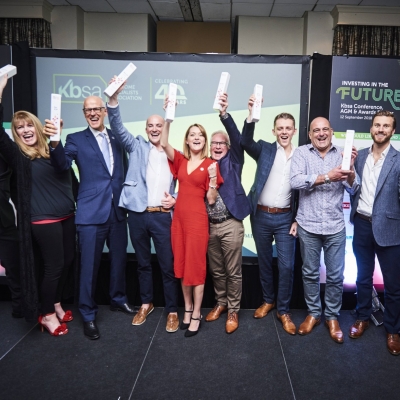 The Kbsa announced the winners of the 2018 Designer Awards at the Networking Dinner held at the Stratford Manor Hotel, Stratford upon Avon on 12 September.

Winner of the Kitchen Designer of the Year (up to £20K), sponsored by AEG, was Andrew Bell from Mike Hughes Kitchens & Bedrooms with his design , which was commended for its well-functioning kitchen with a lovely choice of materials.

Winner of the Kitchen Designer of the Year (£20-£40K), sponsored by Blanco, was Diane Berry of Diane Berry Kitchens Ltd.  The judges said that this design made very clever use of a tight space and Diane had displayed excellent lighting skills making good use of the available natural light.

Winner of the Kitchen Designer of the Year (over 40K), sponsored by Neff was Niko Rasides of Nicholas Anthony Services Ltd.  This was a clear winner for the judges with its clever, simple but beautiful answer to the brief.

Winner of the Bathroom Designer of the Year, sponsored by Airflow Developments, was Glyn Davis from Denby Kitchen Company with his design which was praised by the judges for being exceedingly well executed.

Winner of the Young Designer of the Year, sponsored by Franke UK, was Hania Southwell of at.twenty.one.interiors.  All the judges agreed that this design had a beautiful clarity, met the brief exceedingly well and excelled in composition, colour and use of materials.  Hania will receive an education grant of £1,500 and a cash prize of £500.

Winner of the Kitchen Concept Designer of the Year, sponsored by Blum, was Lynsey Jamieson of Kitchens International.  The judges commented on the selection of materials and the use of proportion, scale and light to create this winning design.

Wayne Hemmingway said, “It was such a pleasure and privilege to be involved with the Kbsa designer awards this year. It is inspiring to see so much design talent across different price points.  It was particularly great to have the opportunity to judge the Young Designer Award as it is so important to nurture and support the young people that have just begun their design careers in the industry.

Two other awards were also presented. The Kbsa Supplier of the Year award which is based on votes from Kbsa retailers was won by Blanco UK Ltd.  This award is sponsored by Clear Insurance Management Ltd and QANW.  The Customer Service Award is sponsored by Smeg UK and was won by retailer members, Denmore Kitchens and Bathrooms of Aberdeen and Classic Interiors.

Corporate chair Simon Acres from Omega Plc also announced a special retail member award to mark the associations 40th year.  This was awarded to Dewhirst Kitchens, one of the founder members of the association and a family business that has been operating for sixty- one years.