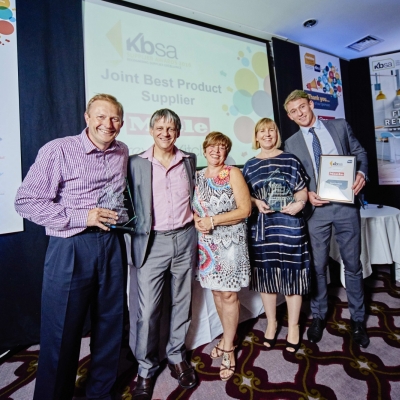 The Kbsa Supplier Awards were announced at the 2016 Kbsa Networking Dinner which followed the AGM & National Conference on 27 September 2016. KBSA members voted for those Corporate member suppliers who they thought had excelled in their service to them in 2016.

Members voted Best Product Supplier of the Year to joint winners Miele and Mereway Kitchens. Best Training Provider of the Year was awarded to NEFF, and the award for Best Display Support was once again awarded to Cosentino for their Silestone brand.

Kbsa Corporate Chair, Malcolm Scott, said ‘These awards are genuinely deserved, as they are voted for by Kbsa retailers, and are therefore based on the actual performance of these brands. It is always a great pleasure to reward those brands that do support the independent specialist directly, and this year’s winners should be proud of their recognition.’

These awards are based on feedback from Kbsa retailers throughout 2016, and reflect members’ opinions on those brands that have performed well during the year.