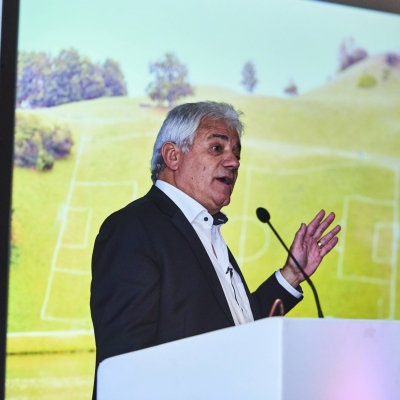 The Kbsa Conference, AGM and Awards Dinner 2019 was the best, most-attended one yet. Take a walk through the event, which included star-studded guests, fantastic speakers, insightful workshops and the highly anticipated Kbsa Designer Award 2019 winners!

The event was held at Stratford Manor, and the day began with a range of workshops, which were extremely popular with delegates. They ranged from 'The Customer Journey' through to 'Social Media Solutions' and 'The Future Marketplace', inspiring all those taking part to build on the successes of the past year as they move towards 2020.

Attendees were full of praise for the insightful workshops, with Acres Consultancy tweeting: "Simon & Ben attended the Kbsa Conference & AGM today. Some fantastic information workshops in Social Media, Customer Journeys and Future Retailing. We are continuously proud to be part of the Kbsa."

Following a delicious lunch and some busy networking, our highly-anticipated Conference continued into the afternoon with the Kbsa Review, Update and AGM and the arrival of this year's keynote speaker, Baroness Michelle Mone. Michelle, founder of Ultimo Lingerie, is one of the UK's most renowned entrepreneurs, and the crowd loved her valuable insights, which included encouraging the audience to get out of their comfort zone, stating: "You should never be afraid."

It would seem that our members have already heeded that advice; when it came to the awards dinner, it was clear that the room was full of hard-working and groundbreaking beacons of our industry.

It was a wonderful night, and a great chance for all the nominees to relax and indulge in delicious food, drink and industry chat. We absolutely adored celebrating and rewarding the successes and wonderful work of our terrific members.

The fantastic Kevin Keegan was our after-dinner speaker, and what an entertaining speech it was, with plenty of laughs and amazing stories. The England football legend also joined us to present the awards, the winners of which we are now proud to announce!

Kbsa Supplier of the Year 2019

The Kbsa Designer Awards 2019 kicked off in style, with BSH Home Appliances Ltd announced as the night's first winners, walking away with the Supplier of the Year 2019 Award, sponsored by Clear Insurance Management Ltd and QANW.

Essex-based kitchen designers Regal Kitchens were next invited up on the stage to collect the Customer Service Award 2019 (sponsored by Liebherr) from Kevin Keegan. Congratulations must also go to Classic Interiors and Ashford Kitchens for finishing close runners up in this award.

Kitchen Concept Designer of the Year 2019

The exciting Kbsa Designer Awards 2019 ceremony continued into the night, with Kitchens International's Gary Gourlay being crowned the Kitchen Concept Designer of the Year 2019, an award sponsored by Blum.

Kbsa Young Designer of the Year 2019

And the Kbsa Young Designer of the Year 2019 is... cu-cucine's Adam Bomok! What a fantastic achievement for Adam to walk away with this well-deserved award, sponsored by Franke.

Bathroom Designer of the Year 2019

It really was a superb evening at the Kbsa Designer Awards 2019, rewarding our amazing members for their fantastic efforts over the last year. We'd like you all to join us in congratulating Ekco's Hollie Kerr (who unfortunately could not be there on the night), our Bathroom Designer of the Year 2019, an award sponsored by Airflow Developments.

The evening then moved on to more awards for exceptional kitchen design. Designer of the Year (up to £25k) was deservedly handed to Aileen Thomson of Kitchens International, the Kbsa member's second award of the evening. This particular award was sponsored by AEG.

That was not to be Kitchens International's last award of the night, however. It appears as though the expert kitchen retailer has made a habit of finding award-worthy talent for their team, with their very own Angus Mackintosh winning the Designer of the Year (£25k-£50k) award, sponsored by Blanco.

The Designer Awards 2019 presentation and dinner was the perfect end to a perfect event, particularly for Jones Britain's Dan Stronge, who collected not one, but both of the final awards of the ceremony!

So far, we have received an overwhelming amount of positive feedback for our Kbsa Conference, AGM and Awards Dinner. Here's what some of our members and attendees have said on the event:

qudaus living: "It was a great evening & Kevin was a true legend on the night too. Congrats to all the winners & all those shortlisted too. See you all again next year."

Kbsa National Chair, Richard Hibbert: "Well what a conference. I was nervous taking the stage as always but enjoyed every minute. Thanks to everyone for coming and a great team effort for putting on such a great event."

Kitchens & Bathrooms News: "It was a great event and well done to the entire team at the Kbsa."

We would love everyone to join us in congratulating each and every one our worthy Designer Award 2019 winners, while thanking all of our wonderful members for nominating their projects and making tonight such a magnificent event. We really can't thank everyone enough for making this year's Kbsa Conference our best, most-attended, event yet. Keep your eyes open for details of next year's Conference, which we have already started planning!