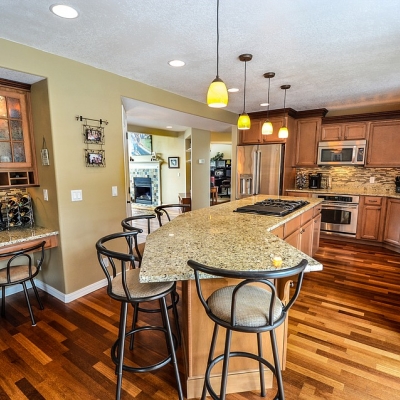 Since the Kbsa’s formation, which is almost exactly 40 years ago, kitchens have changed dramatically in terms of style, size and function.

From the whacky flair of the 70s to the futuristic kitchens we see today, below, we travel through time to showcase the evolution of one of the most important and treasured rooms in our households.

The 70s will be remembered for Margaret Thatcher, The Beatles splitting up, ABBA, The Magic Roundabout, and, last but certainly not least, the Kbsa’s formation in 1978. While this was going on, kitchens developed from functional rooms into a vessel to showcase your fashion sense and individuality.

Bold and daring designs were very popular throughout the 70s, which is the decade in which the first kitchen islands were introduced. Islands became more of a necessity with the rise of the open plan kitchen, which came as a result of casual lifestyles becoming more prominent and kitchens becoming bigger and more sociable areas.

With more women joining the workforce in the 60s, time-saving appliances such as dishwashers, garbage disposals and microwaves came into play. As the 70s went on, the focus shifted from modernisation to personalisation, with stylish owners opting for mustards, oranges and golds alongside wallpapers and fancy laminate.

Michael Jackson’s Thriller, Back to the Future, E.T…. yes, we’re talking about the 80s, a time in which kitchens continued to grow. Some homeowners had absolutely gigantic kitchens, boasting an array of storage options and styles.

Wood furniture, units and floors became popular in the 80s. Matching oak cabinets and floors were a mainstay in many kitchens, while more shelving was made there was a boom in cookbook sales.

With more people entertaining and hosting in their kitchen, there was a need for an increase in inventive seating options, while pantries and breakfast rooms were also introduced as part of the kitchen area.

The bright and playful yellows and golds of the 70s transitioned into more conservative browns. However, some people opted for bold shades when it came to glossy cabinets and tiled countertops. All white appliances were considered very modern and sophisticated in the 80s, similar to pine picnic tables and integrated appliances.

Combinations of white and wood were very common in 1980s kitchens. Washing machines were also moved into the kitchen throughout the 80s.

The start of a new millennium was marked by the increased usage of the internet, social media, and a host of other technological advances. This was reflected in kitchens across Britain, which now featured more tech to make our lives easier and more efficient.

New state-of-the-art appliances were introduced, as well as multimedia systems such as ceiling speakers, which helped homeowners continue to entertain in the kitchen.

Dark woods, in addition to black and white granite, were increasingly popular in post-millennium kitchens. In terms of colour, the popularity of white didn’t show any signs of slowing down during this decade.

Looking back at kitchens of the 00s, you’ll be able to see the influences on the kitchen you know and use every day today.

So, what does the future hold for the kitchen? Smart home technology is no doubt going to play a huge role in kitchens, for both entertainment and culinary purposes.

In terms of trends and styles, what would you like to see in the kitchen of the future? We’d love to hear from you!

Thinking of revamping your kitchen to match both current and future trends? Maybe you’ve seen something you like in the kitchens of the past that you want in your home? Whatever you seek, we’re positive our expert Kbsa retailers can help turn your plans, hopes and inspiration into a reality!